YOUR BIA MEMBERSHIP GIVES YOU EXCLUSIVE ACCESS TO OUR ONLINE MEMBER INFORMATION CENTER.

Log in to learn about fellow members, update your profile, register for events, and much more. See below if you do not know your user name and password or need to create an account. 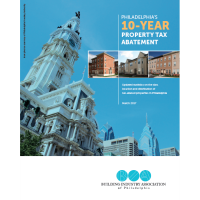 Since Philadelphia launched the 10-year tax abatement in 2000, many years of hard data are now available to assess its impact.

BIA’s new report, based on that research, clearly demonstrates that the tax abatement program is significantly increasing Philadelphia tax revenues and driving residential real estate at all price levels and throughout the city.

The report debunks several misconceptions about the abatement:   The study also reports that homebuilding is up 376% in Philadelphia since the abatements took effect, while slipping 11.25% in the suburbs.